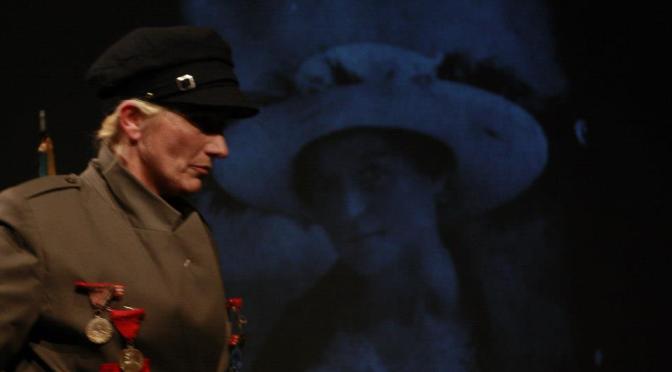 The performance Tales of Bread and Blood is a project conceived by actress Sanja Krsmanović Tasić, that came as a result of many years of research of personal, family and collective history of Serbian nation, especially the period of Balkan Wars, WW I and Tito’s Yugoslavia.

“The art spirit is alive in blood stories”

I never liked performances in which the authors were too personal, talking mostly of themselves, their relatives and ancestors. And here I am with a performance that speaks about two great grandmothers, and one great grandfather , about myself, and my own quest for homeland. It could not be more personal!

This essay in movement I had to write with my body, voice, with my performance and whole being to the audience, to calm the spirits of my ancestors, and to stop my great grandmother Sofia from coming into my dreams and from staring at me with contempt for telling other peoples stories on stage over and over again, and not ours/hers. It is what I owe my children from a wish to stop the circles of war and violence that keep repeating in our country. It is what I owe those from whom I have inherited medals that chime stories of blood, and land where the greenest trees grow, in whose branches howls call out. This performance/essay is also a specific analysis, in artistic form, of the concept of HEROES, of what it is to belong to a certain nation, fatherland, and my personal reflections over these concepts and appearances.

An essay in movement is a narrative scenic event, in which, through artistic expression, true events and concepts are expressed with (self)critical reflection, through elements of personal history put into a context of historic events that have influenced it directly. Movement and dance have always been my primary form of expression, hence the essay has to be written in movement. As with any essay, this one will also contain footnotes, that will, on request, be presented in the perfomance space, and it will have as its ending its own revelation, part by part.

Production: UDUS-Association of Drama Artists of Serbia with support of DAH Theatre

Financial support: Ministry of Culture of Republic of Serbia, City Council of Belgrade, and the Municipality of Vracar.